Zephyr (ゼファー, Zefā) – Raised in a seminary from a young age, it's suggested he was an outcast as he did not agree with the God-based teachings for motivations not entirely clear, Zephyr became deranged and killed everyone at the facility before being subdued by Vashyron. Despite expecting to die, Zenith intervened; Zephyr stays with Vashyron as his partner. They make their living as "Hunters", mercenaries that take on odd jobs throughout Basel.

Zephyr is a 17 year-old boy who was brought up in a seminary from a young age. Zephyr was a part of Sullivan's experiment to transfer Rebecca's traits onto the children of Crank Seminary. He became the only success of the experiment. However, his transformation caused him to become mentally unstable. He flew into a rage, killing everyone involved in the experiment and blowing up the Seminary. He expected to die for what he had done, but his immortality prevailed despite being shot twice in the head by Vashyron. He decided to live to try to figure out why he was spared and worked for Vashyron.

One year later, Zephyr saw Leanne attempt to commit suicide by jumping off of a bridge in Chandellier. He jumped to save her, ending in them both falling from Chandellier to the level below. Miraculously, the two survived the drop, either by Zenith intervening or as a result of Zephyr's enhanced abilities from Sullivan's experiment.

Zephyr, Vashyron, and Leanne accept missions as a trio of hunters earning reward money. As Zephyr takes on more and more missions, he continues to search for the answers to his mysterious survival. 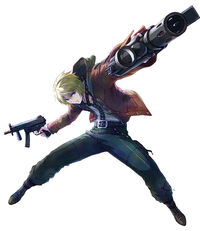 Zephyr, alongside Leanne, appears in Project X Zone as a pair unit, while Vashyron appears as a solo unit.

Zephyr, alongside Vashyron, appears in Project X Zone 2 as a pair unit, while Leanne appears as a solo unit.

Zephyr has several facets that he displays throughout the game. Sometimes he shows a jocular side that is similar to Vashyron. During various cutscenes, he makes jokes at Leanne's expense, usually causing her to get angry at him. He also spouts several one-liners during combat, poking fun at the situations and enemies around the party. Zephyr also has a cold side to him, wanting to be left alone. Leanne constantly tries to cheer him up, only to be met by his rejects, and she is pushed away. However, he cares deeply about Leanne and the two share romantic feelings, but, for whatever reason, neither of them acts on it. He still feels guilty inside for the destruction of the Crank Seminary. In addition, Zephyr displays a fair amount of vengefulness towards the people involved with the experiment that led to that tragic event. Zephyr also has a sweet side, not only did he save Leanne, he tries to cheer her up...In his own way, he tries to make the time better (sometimes) and gives it his all when it comes to bounty hunting.

Zephyr has medium-length blonde hair and blue eyes. He wears three layers, a red jacket on top, a black hoodie in the middle, and a white sleeveless zip-up shirt underneath. He also wears somewhat baggy black cargo pants and black boots. He is usually seen in cutscenes wielding the SG-B226 handgun, although he starts with the SMG-05 submachinegun. Later in the game, as with the other playable characters, Zephyr can equip different clothes and weapons to alter his appearance. His Type A set of clothes consists of different colored jackets, shirts, pants, and boots that are mainly color variations on his default outfit. His Type B outfits consist of a shirt that zips up diagonally, as well as slightly different pants and boots. Funny or humorous clothing are in the Type C outfits. Note that specfic outfits can activate different poses and actions after defeating enemies 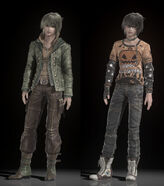