Vashyron (ヴァシュロン Vashuron) is one of the three playable protagonists in Resonance of Fate. He is a 26-year-old man, recognizable by his blonde ponytail and his brown jacket. He is voiced by Nolan North in the US version and his Seiyū in Japan is Ken Narita.

Several years ago, Rebecca was rampaging through the city of Basel, killing all humans that she could find. When she attacked Vashyron, it seemed that he would die. However, he was saved because he was a "Knight of Zenith", a person who was blessed by the Zenith system. The Zenith system intervened and created a Sacred Sign, which appeared on Rebecca's arm. This prevented Vashyron from being killed while at the same time injuring Rebecca's body and mind. Vashyron was the only one to survive Rebecca's attack on his military unit, which was directed by Cardinal Antourion.

Vashyron later formed a trio of hunters with Zephyr and Leanne years later. The three of them take on various missions to earn a living.

On the surface, Vashyron is a carefree playboy, always making wisecracks and never seeming to take things too seriously. He is very playful and makes jokes about nearly everything, from fighting enemies to taking on missions from the Cardinals. He cares deeply for Zephyr and Leanne, often feeling that if he wasn't in the group, it would be a lot easier for their relationship to advance into something more than just friendship.

However, Vashyron has a somber side to him as well that he usually keeps reserved for certain serious matters. As the story progresses, he ends up taking on more and more missions that will have a large impact on Basel, which seems to bring out his solemn demeanor. Even so, he still finds a way to balance both sides out.

Vashyron is a young man who stands at 6' with medium-length blonde hair pulled back in a ponytail, and brown eyes. His default outfit is a brown, leather jacket and white t-shirt. He also wears blue jeans and brown leather boots. Vashyron starts the game with the 1191 .45 handgun (a look-alike of the real world Colt M1911) and is always shown with it in cutscenes regardless of which weapon is equipped. As with the other two playable characters, Vashyron's weapons, hair, and clothes can be customized later in the game. 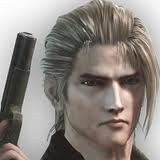