Leanne (リーンベル Rīnberu, Reanbell in the Japanese version) is one of the three playable protagonists of Resonance of Fate. She is recognizable by her long, blonde hair, white and blue dress, and long boots. In the Prologue of the game, she is 21 years old. She celebrates her 22nd birthday in Chapter 13. Leanne is voiced by Jessica DiCiccio in the US version and Aya Endou in the Japanese version.

Leanne was one of 20 children used in an experiment by Rowen, Sullivan, and Juris to test Zenith's control over life and death via crystals. Each child had a respective crystal that was programmed in such a way so that the corresponding child would die at a designated time (Leanne was supposed to die on her 20th birthday). Leanne was subject #20, the last child who was supposed to die. When she neared the hour that she was scheduled to die, she decided to escape her prison. Once outside, she decided to attempt suicide, realizing that she would die soon anyway.

Leanne was saved by Zephyr, who caught her as they fell from the bridge she jumped off. The two of them plummeted down from Chandellier and down to the next level, miraculously surviving. Not only that, but Leanne did not die when her appointed time came, somehow defying the programming in her quartz. Leanne decided to follow Zephyr after the incident and joined him and Vashyron as a hunter, taking on dangerous missions in exchange for reward money.

As the story progresses, Leanne develops an interest in Zephyr. This relation grows stronger up to the last chapter. Although the two might not notice this going on, Vashyron is aware of this.

After defeating Rowen, it is discovered that she had her quartz safely encased in her left hand. The stone that they shattered at the lab could possibly be the Prelate's. Although this could be a true theory, it is never confirmed as if the Prelate's death was a mystery. 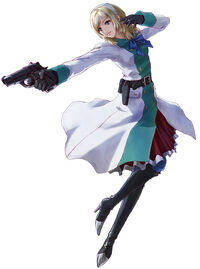 Leanne alongside Zephyr appears in Project X Zone as a pair unit, while Vashyron appears as a solo unit.

Leanne returns in Project X Zone 2 as a solo unit, while Zephyr and Vashyron appear as a pair unit.

Leanne/Reanbell appears in the manga 'The Secret Hours' along with Zephyr and Vashyron.

Leanne is usually kind and thoughtful. She frequently tries to help Zephyr when he is feeling angry and depressed, but even she has a limit. When Vashyron and Zephyr tease her too much, she retaliates with either slapping or yelling, whichever seems more appropriate for the situation.

Leanne has long, blonde hair and blue eyes. She stands at 5'8. She wears a white and blue dress, complete with a large ribbon. She also wears long boots and gloves. Her starting weapon is the B-N84 handgun. Like Vashyron and Zephyr, her equipment can be changed later in the game.